According to the Schneider Institute and the Civic Development Forum - the main founder of the Coalition to Reduce Public Debt ( dlugpubliczny.org.pl ) the size of the shadow economy in Poland is as much as 29% of GDP. 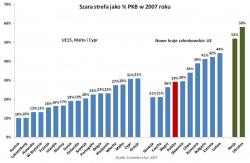 For comparison, in the Czech Republic and Slovakia it is 21%, which puts both countries on a similar level as Sweden, Denmark, Portugal and Belgium. The most common reasons for the emergence of the shadow economy are high administrative and tax burdens for small entrepreneurs. It is easy to conclude that, although still not the smallest, the administrative and tax burdens in both republics are lower than in Poland.