At today's meeting, the government adopted a draft of tax reforms that will be successively introduced in 2012-2013. The reforms generally do not introduce changes to the total amount of taxes and para-taxes (insurance premiums), but as the Minister of Finance commented, they are intended to simplify the system. 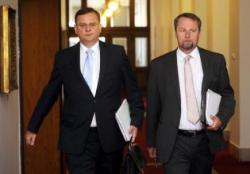 The income tax rate will be increased to 19%. However, it will not be counted from the so-called"Superbrutto" income, ie excluding insurance costs. Thus, both employees and entrepreneurs will be able to deduct the costs of their insurance from their income.

The tax on donation will also increase to 19%, from which, however, relatives will be excluded.

In addition, dividends paid will not be taxable. This change is to apply to payments for 2012.

Contrary to the announcements, there are no plans to reduce lump-sum expenses for entrepreneurs who do not keep simplified or full accounting (current rates are 40-60-80%).

A novelty is the introduction of a bonus for employees, which is to replace the hitherto very popular"stravenky", ie food vouchers, which were exempt from income tax, on similar principles as in the past in Poland hypermarket coupons.

Changes in the field of VAT

Changes in the scope of insurance

The system of paying contributions to insurance will change employees. Details have not yet been published.

Social and health insurance contributions for entrepreneurs, freelancers and artists will be unified to the level of 6.5% (currently 13.5% social and 6.75% health). This change is one of the most positive. The same rate will also be charged on employees' salaries.

The existing tax offices, customs offices as well as social and health insurance funds will be replaced by the"Single collection points". The idea resembles the project of Minister Zyta Gilowska. Entrepreneurs will settle all taxes and contributions to one office only.

The change will not eliminate the diversity of sickness funds, but the taxpayer will pay all taxes to one office with which he will settle and which will redirect fees and settlements accordingly.

The scope of entities obliged to communicate electronically with offices will be expanded.